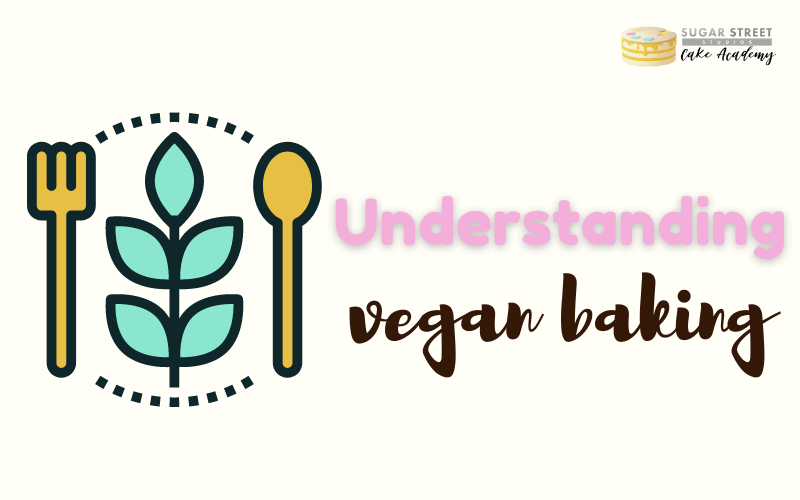 You may have noticed over the recent years that veganism has become increasingly popular, with a huge rise in plant based products being offered in supermarkets, cafes and restaurants. And of course this quest to pursue the health benefits of a vegan diet has also has spread to the cake world and features heavily in baking.

There are some INCREDIBLE vegan cakes out there either ready to buy or fantastic recipes for you to try at home.

So what impact does it have on cake? If you are thinking of baking a tasty vegan cake you first need to understand the science of vegan baking.

Firstly let’s look at the ingredients we have in a typical cake which aren’t vegan.

Coming from cows this sadly makes butter non vegan, however there are some amazing butter alternatives out there. Using a type of oil in your cake is a great butter substitution. In fact some cake recipes often call for oil instead of butter as standard procedure. This is often true in carrot cake or a rich chocolatey devils food cake.

You can also find some great dairy free spreads which are often olive oil based or using some type of vegetable fat. But always check the label! Sometimes olive oil spreads can still contain milk. Now these can be a little harder to replace in a cake due to the important role they play. Eggs help keep your cake nice and light and fluffy, and they also help with the structure of the cake. When you mix egg into your cake mixture tiny air bubbles are created which then get coated by the flour and hold their shape.

There are a few different options you have when it comes to replacing the eggs in your recipes. Some recipes, or icings will call for milk or cream, this is actually the easiest ingredient to substitute. Often milk in a recipe is mostly there to add wetness, the fat content of milk is fairly low when you look at the proportion of milk in a recipe, so what you substitute it for shouldn’t make a huge difference. There are so many plant based milk alternatives available such as soya, almond, oat or coconut and these are readily available in fresh form or long life. Be careful as some do have quite a lot of added sugar so you might want to keep an eye out for the unsweetened version assuming your cake is sweet enough already! If your icing recipe calls for milk this can often be substituted for water or lemon juice.

Plant based cream is slightly less common but it does exist. The easiest to find is usually a soya cream, but coconut cream can also be a great alternative to fresh dairy cream as it thickens really well, it is particularly good for making a vegan ganache recipe. If you are looking at vegan cakes for the health benefits then why not also ramp up the nutrients in your cakes by adding some vegetables? Veggies in cakes are a great way to add moisture and create a lovely texture. The most common of course is the humble carrot cake. But why not think a bit further outside of the box and look at what other vegetables can be added to your cakes.

We love adding beetroot to our cakes. Not only does it provide a lovely, earthy flavour but gives off the most amazing colour. It can add depth to a chocolate cake, or the juice can be whipped into a vibrant pink icing.

Pumpkin or squash is another winning veggie to use in baking. It plays a similar role to carrot and works well when grated into cake batter. Whilst available all year round it lends itself to autumnal baking and pairs well with warm spices such as cinnamon and nutmeg. You can either use fresh or canned pumpkin.

Another favourite is courgette in cake. It plays a very similar role to carrot and works very well when used grated in cakes. It adds a serious amount of moisture (sometimes too much so you might need to soak up some of the moisture first), and it pairs wonderfully with flavours such as orange, cherry or lime.

learn more about the Cake Academy